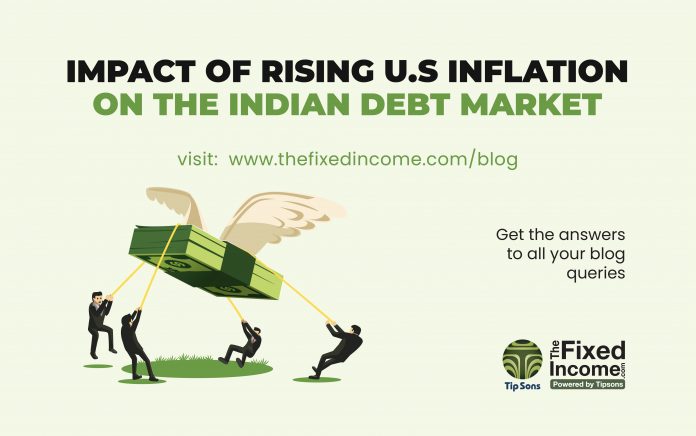 Rising inflation in the U.S has stirred the global financial markets.

Before we access the impact of same on the Indian debt market, let’s briefly understand what ‘inflation’ is all about.

Inflation is an increase in the prices of goods and services in an economy, resulting in a reduction in the purchasing power of money. Governments employ monetary policies to curb inflation when required. In an event of rising inflation in an economy, a government would employ monetary measures to reduce the supply of money in the economy by increasing the interest rates and effectively decreasing the market price of debt securities and increased yield to maturity (YTM).

Impact of rising U.S inflation on the Debt market in India

U.S inflation rate soared to a 13-year high of 4.2% in April 2021, a staggering increase by 0.6% from the expected inflation rate. Increasing inflation in the U.S economy is causing a commotion globally.

Increasing inflation would imply increased interest rates which would make the U.S financial market comparatively conducive for foreign investors, who will begin ejecting money out of their local and non-U.S markets, and begin investing in the U.S capital market.

Another effect of speculations of rising inflation in the U.S, is a drop in the share market as investors are beginning to get edgy. The rippling effect is seen in American, European, and Asian markets.

What are the repercussions of this for debt market in India?

In addition to an outflow of capital from the market as investors will now have an option to generate higher returns by investing in the U.S market, a further decline in investment by foreign portfolio investors (FPIs) are the key areas where the Indian debt market is feeling the brunt of rising inflation in the U.S.

FPIs have continued to be the net sellers in the debt and equity market in India, with a net sale of $1.7 billion in April 2021. Since mid last year, this ejection of capital from the market by FPIs was largely driven by uncertainty caused by the pandemic. The capital market in India may now have to brace itself for further ejection of capital by FPIs owing to rising inflation in the U.S which will make it more lucrative for investors in the debt market.

One key aspect FPIs take into consideration before investing in debt securities in India is the yield spread in India as compared to the spread in a mature market like the U.S. Given speculation of rising inflation and possible increase in the interest rates in the U.S, the spread of bond yield will narrow as U.S market will offer higher coupon rates on bonds. This will provide an opportunity for investors to exit out of the existing capital markets and invest in the U.S instead.

Economist have long believed that by controlling the money supply in the economy, inflation can be controlled. Experts are indicating a corrective monetary measure by the U.S Government to curb inflation by increasing the interest rates and lowering demand in the economy. However, the U.S Federal Reserve is of the opinion that this inflation is temporary and does not call for any monetary intervention to check inflation and the market will adjust by early next year once the economy bounces back post Covid.

Despite the rising concerns, there are speculations on whether the increase in U.S inflation rate is a temporary phase and will pass without the need for a corrective monetary measure or its going to stick around. This increase in inflation has come just a month after the U.S Federal Reserve approved a stimulus package of $1 trillion in March 2021.

Additionally, the U.S Government has announced a budget plan for additional $6 trillion to boost the economy post Covid with spending in infrastructure, education and family plans, and discretionary spending. The government is providing Americans access to additional cash and savings to spend, thus driving the prices and inflation higher.

Policy makers may wait for more data before beginning to take actions as merely one month’s spike in inflation may be too soon to react on.

A bond issuer will not be able to alter the coupon rate on the existing bonds (in the case of fixed coupon bonds), however what can be done to make the existing bonds appealing for new investors is to lower their market price which would also mean the value of the debt security has gone down.

Increased interest rates will also increase the borrowing costs for companies as they will now have to pay more, in the form of increased coupon rate (increased interest rates), to raise debt from the market. Increased borrowing costs adversely impacts the valuation of a company and possibly can cause the share prices to drop, pushing the investors to start selling and exit out of the equity market.

Market volatility driven by rising inflation in the U.S should be read in conjunction with domestic monetary policy and measures taken by the Reserve Bank of India (RBI).

Yield on long-term 10-year bonds in the U.S have been increasing

In the current calendar year, CPI inflation in India has been fluctuating between 4.1% in Jan to 5.5% in March, with April inflation settling at 4.5%[2]. CPI inflation target for April 2021 to March 2026 has been set at 4% by the RBI, with +/- 2%[3]. RBI Governor also announced continuation of liquidity in the market and an indication of another stimulus package once the unlock phase begins.

Is it too early to say or is it too late to react? Near future should provide more clarity but investors for sure should tread with caution.