The Fixed Income
Home Bonds and Debt Which is Better : Bond or Loan 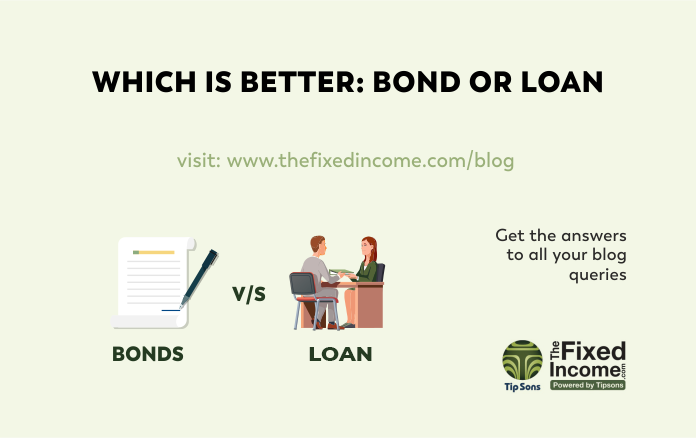 Bonds and loans are funding vehicles that firms use at various times throughout their existence. These are two theoretically distinct credit products that are frequently mixed together. It is critical to distinguish between the two types of funding and to comprehend their characteristics in order to grasp their genuine core.

A bank loan is a financial transaction in which a banking institution (lender) gives a sum of money to a third party (borrower) in exchange for the payment of interest, also known as the cost of money, under the terms of a contract or agreement between the parties involved. A bond, on the other hand, is a debt instrument issued by a company or government and sold to investors on the financial markets in order to raise money to fund its operations. This bond’s issuer guarantees to refund the money along with previously agreed-upon interest payments (coupon).

The two finance models are not mutually exclusive and can work together. However, in order to fully comprehend their significance, it is necessary to distinguish between the two.

Who is the one who asks for the money?

A bank loan is requested by a company. In the case of bonds, however, the corporation issues debt instruments in the financial market that are purchased by investors, with the help of banking companies as placement agents.

Are the payment schedules for the two formats different?

Bonds have longer payment durations, whereas loans normally have a shorter term.

Are both funding options equally flexible?

Loans are tailored to the needs of the firm and can alter as the company grows. They are willing to renegotiate their terms to the benefit of the borrower if payments are made ahead of schedule. With bonds with more complicated and limited refinancing restrictions, this is not the case..

In a financial world that is constantly in flux and evolving, these are the most significant differences between the two products. The phenomenal increase in green products and services, which include both loans and bonds, demonstrates this. 2017 was a pivotal year in the development and promotion of long-term financing. Green bond offerings surpassed all previous highs in terms of volume, with a 52 percent increase over the previous year. Green loan disbursement was far from a laggard, with previously unheard-of, albeit more moderate, growth rates.

Bonds and loans have certain similarities.

Both, as previously said, allow corporations and governments to borrow money. During the payment procedure, firms/governments will be charged annual interest rates.

Governments and corporations have the authority to sell bonds. Consumers and businesses seeking financial assistance, on the other hand, can obtain loans or personal loans.

When it comes to bonds, you can expect a fixed interest rate for a set length of time. However, interest rates on loans can be either fixed or variable, with shifting base rates.

Bond market is the forum for selling bonds. They can be sold to financial and government organisations. Banks and non-banking financial companies, on the other hand, are the primary providers of loans (NBFCs).

Bond prices fluctuate, and they are frequently purchased and sold on the bond market. Loans, on the other hand, are often fixed with the originating bank or NBFC.

At the end of the 10, 20, or 30 year period, the bonds must be fully repaid. The principal and interest amounts are included in loan instalments, and the payback time is specified in the agreement.

Government bonds are typically thought to be safe, but they don’t provide much in the way of returns. Unsecured bank loans have higher interest rates than secured bank loans, increasing the risk factor.

Bonds will be sold at a set price by companies. The buyer will commit to repay the bond in 10, 20, or 30 years, depending on the terms of the buyer-seller agreement. In the meantime, the government/company will pay the bond’s interest. In exchange for repaying the firm, the buyer will receive interest payments for the duration of the bond.

The biggest difference between a loan and a bond is that the former is highly marketable. Purchasing a bond usually entails access to a market that facilitates bond trading. This means you’ll be able to sell bonds before the maximum of 30 years has passed. In actuality, investors buy bonds in order to diversify their financial portfolio.

Which is Better : Bond or Loan